Aniplex began streaming on Wednesday the promo video for the upcoming anime feature film based on Tsukasa Hojo‘s City Hunter action comedy manga series titled “Gekijyoban: City Hunter/City Hunter: The Movie.” The teaser trailer also revealed that the anime show is set to be released in Japan on the 8th of February, 2019 at Sunrise.

Gekijyoban: City Hunter/City Hunter: The Movie will be directed by the anime show veteran director ,Kenji Kodama with scripts by Yoichi Kato (Aikatsu!, Yo-kai Watch, Monster Strike the Animation). The anime film will be set in present-day Shinjuku, and will see 71-year-old Akira Kamiya return as Ryo Saeba and 59-year-old Kazue Ikura as Kaori, are expected to reprise the roles.

The a spinoff manga titled “Kyō Kara City Hunter,” launched in Comic Zenon magazine on July 25, 2017. The manga tells the story of 40-year-old an unmarried woman who has been obsessed with City Hunter’s Ryō Saeba since high school. One day she is hit by a train and wake up in the world of City Hunter. A new anime show is also allegedly in works. 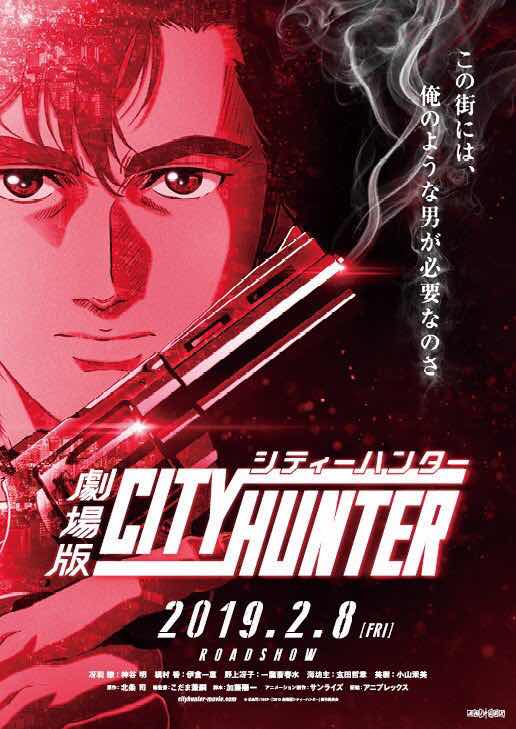 The original City Hunter detective comedy action manga series written and illustrated by Tsukasa Hojo was serialized in Weekly Shōnen Jump from 1985 to 1991. The manga was adapted into an anime television series by Sunrise Studios in 1987. Jackie Chan starred in 1992 live-action Hong Kong film adaptation of the original manga. The 1985 manga inspired four television anime series, one anime film, and several video and television specials.